The Melbourne Holocaust Museum is Australia’s largest institution solely dedicated to Holocaust education, research and remembrance. We exist to keep the voices of Holocaust survivors alive through education and memorialisation, to combat antisemitism, racism and prejudice.

Join us in launching Gift of Time: Discoveries from the daily ritual of reading with my father by Frances Prince.

At the beginning of the pandemic, Frances Prince began reading to her Holocaust survivor father, David Prince. As they read many memoirs by Holocaust survivors, David reflected upon his Holocaust experiences and life as a Polish Jewish university student in post-war Munich. Frances penned Gift of Time to capture their conversations together which centred on David’s recollections from the past.

The book launch features an in-conversation between Joanna Murray–Smith and Frances Prince followed by a live Q & A.

The event will stream from the screen at the top of this webpage from 8pm Thursday 14 October. A recording will be available to watch on demand from the same place after the conclusion of the livestream event. 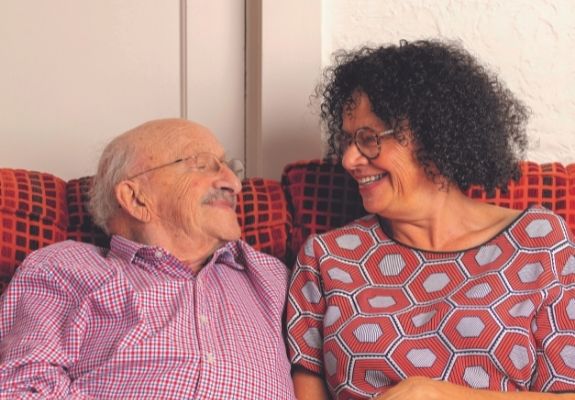 With expertise in Jewish studies, Holocaust education and leadership in Victoria’s interfaith community, Frances Prince currently serves as vice president of the Australian Jewish Historical Society Victoria, on the committee of the annual Lodz ghetto commemoration and as an executive member of the Jewish Community Council of Victoria.

Joanna Murray-Smith is a prolific writer of many novels, libretti and screenplays. Her acclaimed plays have been produced and translated across the world, and she is the recipient of numerous awards, including the inaugural Mona Brand Award.

Gift of Time has been published by Real Film and Publishing. A signed copy of the book can be purchased via the button below, with the prologue available for preview through the Jewish Women of Words