A film about the genocide in Darfur and the struggle against indifference.

Funds raised will go to the MHM and Global Grassroots for its social work with women genocide survivors.

This documentary follows the experiences of Brian Steidle, a former US Marine Captain who witnessed the systematic killing of civilians in Darfur in his role as a military observer of an existing ceasefire agreement. Frustrated with what he came to realise was widespread censorship of, and indifference to, the tragic events that played out before his eyes, Steidle resigns from the military to become an activist. The film draws on Steidle’s vivid testimony, photographs and video footage he recorded during his time in Sudan, and interviews with survivors who escaped the destruction of their homes while many of their families did not. Situating the genocide in Darfur within a complex political climate and the context of continual acts of genocide throughout the last century, The Devil Came on Horseback is simultaneously a lament for those lost and a call to action.

Please note that this film contains disturbing images of physical violence. It is rated M for mature audiences by the Australian Classification Board. 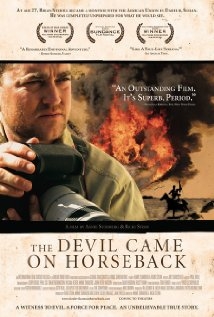