“Irena’s Song – A Ray of Light Through the Darkness” Concert

The embassies of Israel and Poland, in conjunction with Orchestra Victoria, are showcasing Kobi Oshrat’s masterpiece concert tribute to Irena Sendler, 5 July 2012.

A tribute concert to honour the sacrifices made for humanity by righteous gentile Irena Sendler will premiere on Thursday 5 July at the Melbourne Recital Centre in Southbank. Irena’s Song: A Ray of Light in the Darkness is a moving, classical tribute to Polish Catholic social worker Irena Sendler, who saved some 2,500 Jewish children from the Nazi regime.

The evening’s program, compared by ABC’s Jon Faine, will feature a unique blend of personal tributes, emotional stories and recollections from an array of people including Irena Sendler’s daughter; righteous Polish-Australian Adrian Vanas, who risked his life to save Jews and today lives in the Montessori Jewish Homes; and the Polish and Israeli Ambassadors.

The symphony premiere, conducted by original composer Kobi Oshrat and featuring esteemed Israeli soprano Karin Shifrin will be performed by Orchestra Victoria. It will be accompanied a Polish piece by Simon Laks “Suite polonaise (Suita Polska)” (1936) and an intermezzo of Jewish folk music.

One night only – this event is not to be missed. It features the original composer Kobi Oshrat, Israeli soprano Karin Shifrin, Orchestra Victoria and additional Polish and Jewish acts including spoken tributes from various special guests.

Tortured and sentenced to death for the crime of “aiding Jews”, Sendler escaped and continued her resistance under an assumed name. For each child she saved, Sendler wrote their real name, new name and those of their parents in code, and buried these records in jars beneath a neighbour’s apple trees so she could reunite the children with their parents after the war.

She kept in contact with the children she saved, and their families, until she passed away, age 98 in 2008. Sendler is survived by her daughter, who will provide personal insights of her mother via a video address at the event.

Remembered as one of the Righteous among the Nations, Irena Sandler was nominated for a Nobel Peace Prize and recognised by President Barack Obama for her “extraordinary courage”. Coming especially from Israel is the award-winning original Israeli composer and conductor, Kobi Oshrat and esteemed Israeli soprano Karin Shifrin. They will partner with Orchestra Victoria to perform the symphony.

Oshrat describes the work as “a professional mission” that was the least he could do to honour this woman”. The 20-minute work was written as a collage of Sendler’s life. Mr Yuval Rotem, the Ambassador of Israel to Australia, said “it is an honour to create this majestic and meaningful tribute to the legacy of Sendler and other Righteous among the Nations”.

The evening’s program will feature a unique blend of personal tributes, emotional stories and recollections from an array of people including Irena Sendler’s daughter; righteous Polish-Australian Adrian Vanas, who risked his life to save Jews and today lives in the Montessori Jewish Homes; and the Polish and Israeli Ambassadors. The premiere will be accompanied a Polish piece by Simon Laks “Suite polonaise (Suita Polska)” (1936) and an intermezzo of Jewish folk music.

ABC’s Jon Faine will compere the occasion and will be joined in the recital hall by a VIP guest of honour.

Mr Andrzej Jaroszyński, Ambassador of the Republic of Poland highlighted the importance of the concert saying, “in the present world full of tribulations and confusion, those eager to ignore the lessons of the past should hear the voices of those who remember, so that the nightmare of history repeated can never, ever happen”.

The concert is generously supported by The Pratt Foundation and held in cooperation with the Zionist Federation of Australia, the Melbourne Holocaust Museum and the Polish Community Council of Victoria. 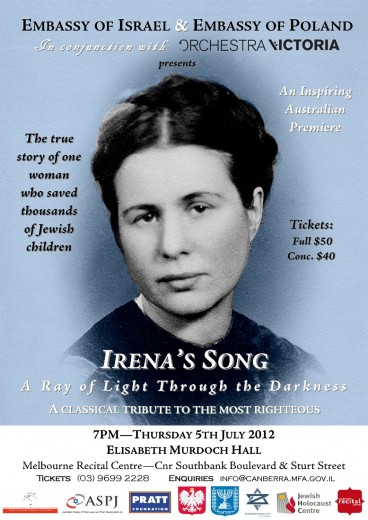