The story of Irena Sendler, a social worker involved in the Polish underground during World War II and who was arrested by the Nazis for helping Jews.

The dramatisation stars Anna Paquin in the role of Sendler, who saved the lives of nearly 2,500 Jewish children by smuggling them out of the Warsaw Ghetto.

Surviving torture and a death sentence at the hands of the Nazis, Sendler was awarded Poland’s highest honour, the Order of the White Eagle, and was nominated for the Nobel Peace Prize in 2007.

The Melbourne Holocaust Museum has honoured Sendler’s heroism in the past, making this a fitting film with which to end our series of 2012 screenings. Don’t miss out!

Many thanks to Gryphon Entertainment, Australia, and VM Distribution, New Zealand, for making this screening possible.

In partnership with the Processes of Signification Emerging Research Group (PSERG), Deakin University. 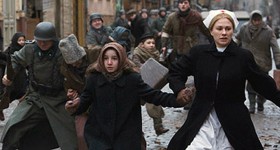