At Barletta, a small town in southern Italy, a quiet but determined hero has brought to life an entire history of forgotten music. For over 20 years, in a race against time and oblivion, Francesco Lotoro, an Italian pianist and musicologist, has dedicated himself to finding and bringing back to life a rich musical legacy that has been forgotten and nearly lost: the music clandestinely composed in WWII concentration camps. Professional composers and amateur musicians alike, writing on now-faded and torn scraps of paper, left behind musical gems in all styles and genres, from symphonies, operas and liturgical works to tangos, folk songs, and gypsy music.

Most of these works have never been heard. Inspired by these musicians’ indomitable creative spirit – a form of resistance amidst the inhuman and desperate conditions of the camps, Lotoro has made it his personal mission to single-handedly track down, decipher, archive and perform their music. He has scoured Europe to discover and record music composed clandestinely in World War II camps. Aided by his wife and a handful of friends, he has archived over 4000 scores, including symphonies, operas, folk songs, liturgical works, and also swing and gypsy music. From Prague to Krakow, from Rome to Paris, this is the astonishing story of a race against oblivion, where each note sounds like a challenge to the oppressor.

“If this music isn’t played, isn’t published, isn’t made known to the entire world”, he says “it’s as though it has never left the camps”. This captivating and moving documentary accompanies Lotoro on his passionate quest to restore this forgotten body of musical works to the collective memory of all mankind for posterity, and in so doing, to finally set it free from the camps.

This film has been supported among others by Apulia Film Commission. With the partecipation of RAI TRE and Istituto Luce Cinecittà. 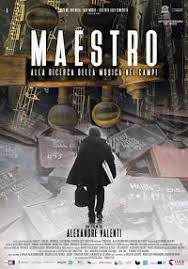