The issue of Jewish victims who co-operated with the Nazis is explored in this compelling documentary.

The complex subject of so-called ‘privileged’ Jews has been and remains a particularly controversial aspect of the Holocaust. ‘Privileged’ Jews include many of those prisoners in the camps and ghettos who held positions that gave them various benefits, but often forced them to behave in ways that have been judged as both self-serving and harmful to fellow inmates. After the war, a number of ‘Kapo Trials’ were held in Israel to investigate the behaviour of those who ‘co-operated’ with their Nazi persecutors.

Taking these trials as a point of departure, Kapo (a name meaning ‘head’ or ‘chief’ given to those who supervised labour squads in the camps) explores the experiences of various individuals who held positions of ‘privilege’ in different settings.

The documentary contains interviews with survivors filmed in Germany, Poland, Israel and Australia, which are interspersed with archival documents, photographs and film footage. The film raises the troubling dilemmas of how victims who behaved in controversial ways can be understood, and whether or not they should be judged. 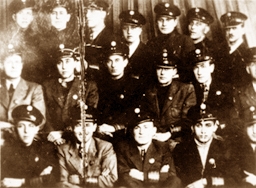