The MHM Film Club will be screening the award-winning documentary Nana (2016) USA, Belgium and Poland. Directed by Serenka Dykman, who is a New York-based filmmaker, and a graduate from NYU’s Tisch School of the Arts. Her work, ranging from comedy to drama and documentary, has won her over 40 awards in the past three years.

Nana is a feature-length transgenerational documentary. The filmmaker retraces her grandmother’s Auschwitz survival story, and investigates how her life-long fight against intolerance can be taught to the new generations.

Following the screening there will be a third generation panel of speakers: Dr Jordy Silverstein, Melanie Raleigh and Gilad Cohen.

Maryla Michalowski-Dyamant, born in Poland, survived Ravensbruck, Malchow, and Auschwitz, where she was the forced translator of the “Angel of Death”, Dr Mengele. She dedicated her post-war life to publicly speaking of her survival to the young generations, so that it would never be forgotten or repeated. Alice and Serena, her daughter and granddaughter, explore how Maryla’s fight against intolerance can continue today, in a world where survivors are disappearing, and intolerance, racism and antisemitism are on the rise. 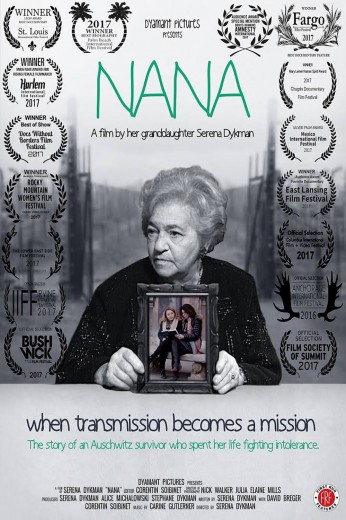