MHM Film Club will be screening “Not Without You – Phillip & Bella” (2016) 34 mins, produced by David Slowo & “Ever Grateful: Anonymous Rescue During the Holocaust” (2016) 20 mins, produced by Phillip Maisel OAM & Sophie Boord.

Not Without You is a Melbourne produced short documentary about the power of memories, undying family bonds, separation and hope. Born in 1922, twins Phillip and Bella were inseparable during their childhood in Vilna. In this moving and compelling short documentary they recount their lives together and the difficulty of their forced separation and the years they spent apart. A miraculous reunion at the end of the war laid the basis of an undying bond and legacy that continues today.

Ever Grateful: Anonymous Rescue during the Holocaust. Six Holocaust survivors express their gratitude to strangers whose acts of kindness saved their lives. For this they are ever grateful.

MHM Film Club: The aim of the MHM Film Club is to view and discuss films about the Holocaust, other genocides and human rights issues. Monthly film screenings are followed by guest speakers and informal discussion. 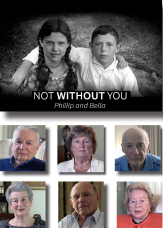