A tragi-comedy about the deportation of Hungarian Jews, which tells the story of one woman’s courage in the face of adversity.
Directed by Michael Verhoeven.
Presented by Dr Deb Waterhouse-Watson, Deakin University.

Based on the novel and play by the Hungarian author and Holocaust survivor George Tabori, the film tells the story of his mother’s experiences during the deportation of Jews from Budapest to Auschwitz in July 1944. Combining fictional and documentary styles, My Mother’s Courage is part comedy, part tragedy, and depicts the Holocaust survivor himself onscreen as he interacts with his mother (played by Pauline Collins) and those around her. Having claimed that ‘we have no right to assert that this is reality precisely because it is a true story’, director Michael Verhoeven privileges a heavily ironic representation over the commonplace, conventional narrative found in most other films. Focusing at length on a setting of persecution given little attention in Holocaust cinema – the deportation trains – the film touches on some controversial and even taboo issues. 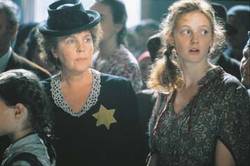