When Ravished Armenia, a nine-reel film directed by Oscar Apfel, first screened in New York City in 1919, it was primarily for the purposes of fundraising and “a wider consciousness-raising campaign”. It was based on the testimony of 19 year old Aurora Mardiganian, a survivor of the Armenian genocide (1915-1923), who plays a pivotal role in this film based on her book The Auction of Souls. All that is left of the nine reels is a 20 minute sequence that has been spliced together to explain a cohesive narrative of the genocide. It is a deeply self-conscious film which is arguably heightened by the fact that Mardiganian “acts out” her account of the genocide. The film begins with World War I, depicting the war as a cloak for the genocide which began in April 1915. The 20 minute sequence depicts the separation of men from women and children, the forced march into the Syrian desert without food, water or shelter, and the extent of the genocidal sexual violence towards the Armenian female population. Some of the events were sanitized for the Western audience, and were replaced with strong Christian imagery that would speak to potential fund raisers for the Near East Relief. Regardless of its overt provocation, Ravished Armenia still holds its importance in filmic history as one of the first films to “document” a genocide. 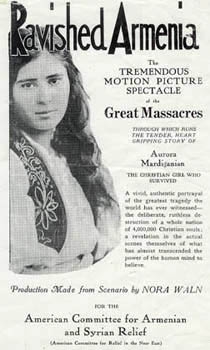