In 1978, a Polish farmer discovered an old vodka bottle with dozens of handwritten scraps of paper inside.

Word of his find reached Israel, where long-time kibbutz member Yaakov Guterman realized the bottle might contain the notes of his father, who used it to hide his personal documentation of the Holocaust.

When the bottle was reopened, the legacy of his father’s struggle came pouring out. 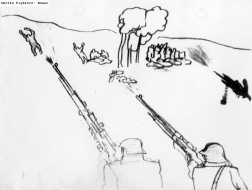