Life before, during and after the Holocaust: recent highlights from our collection

Home » News from the MHM » Life before, during and after the Holocaust: recent highlights from our collection

The Melbourne Holocaust Museum houses an extensive collection of materials related to the Holocaust, most of which have been donated by Holocaust survivors who migrated to Melbourne. The artefacts from our collection contain material evidence of the various experiences of Jewish victims and survivors of the Holocaust.

Every year as our collections grows, we gather evidence relating to each item to share with you and build upon our shared knowledge of life before, during and after the Holocaust. Read on to find some exciting new additions, and observe how artefacts can paint a broad yet detailed record of Holocaust experiences.

The value of friendship

This below photo from our collection showing a group of teenage girls and young women gives us a chance to remember the connections formed by women during the Holocaust. While most names of these women are unknown, we know they stand together in Sosnowiec in 1940. 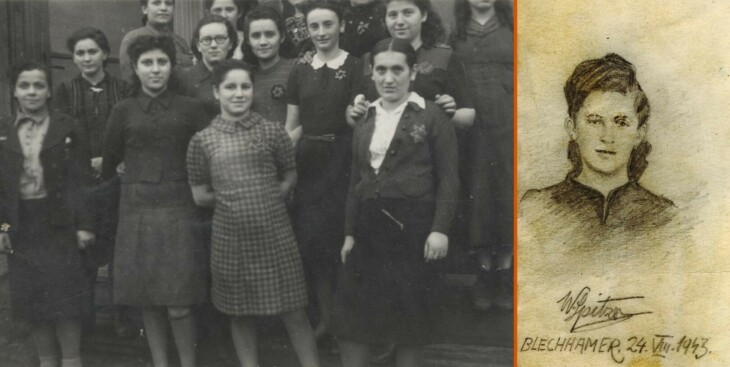 Sosnowiec, located in Poland, north of Auschwitz, had a pre-war Jewish population of 30,000 people. The Nazis deported 15,000 Jews from 1939 until establishing a ghetto in 1942. In 1943, the Nazis sent most inhabitants to Auschwitz.

The drawing on the right shows a rare portrait of one of these Sosnowiec Jewish women: Ida Knobler (later Frydman), created by artist Walter Spitzer (1927-2021), at Blechhamer, a forced labour camp. Ida married after the war, and the couple migrated to Australia in the early 1950s. They spent the next half-century together, both passing away in Melbourne in 2009.

We honour women survivors like Ida, and their strength in building a life after the Holocaust, as well as women like her friends, murdered by the Nazis.

The below poster from our collection marks the 37th Anniversary of the Warsaw Ghetto uprising, held in Melbourne on 12 April 1980. Speakers included Marcus Einfeld QC and Abram Zeleznikow, a ghetto fighter and partisan, with a memorial service the following day.

On 19 April 1943, the Warsaw Ghetto uprising began which became the most widely commemorated Jewish uprising during World War II. On the eve of Passover, around 700 combatants, alongside other inhabitants of the ghetto, resisted final deportation by German troops and police. The uprising was a response to almost a year of forced deportations from the ghetto – as residents came to understand that death, instead of ‘resettlement’, awaited them on the other side.

The uprising lasted until May 16. Approximately 7000 Jews died in the fighting, with a further 7000 arrested, and remaining residents sent to forced labour camps and killing centres.

Over 40 years since this poster’s creation, and almost 80 years since the uprising, we continue to remember the Jewish inhabitants of the Warsaw Ghetto and their brave resistance in the face of immense terror. Writing during the Holocaust

Telefon (Telephone), a poem by Wladyslaw Szlengel from our collection, exhibits poetry’s power to speak about people’s thoughts and feelings during the Holocaust.

Already a popular Polish writer before the war, Szlengel continued his craft in the Warsaw ghetto before he was killed in the 1943 uprising. Chava (Helen) Irlicht found the notebook with this poem (written around 1940) and kept it while living under false identity throughout the Holocaust. It was an early donation to our collection many years later.

With a heart shattered and sick
With thoughts of that other side,
I was just sitting, in the evening,
By the phone. —-

And thinking to myself; ”Shall I call
That one on the other side,
As I do have a phone duty
In the evening?”

And, suddenly, a thought strikes me: ”my G-d, I don’t actually have anybody to call”
In the year 1939
I took a different road.

Our paths have diverged
Friendships got stuck in the more.
And. Now, look at this, I don’t
Even have anyone to call.

Searching for family after the war 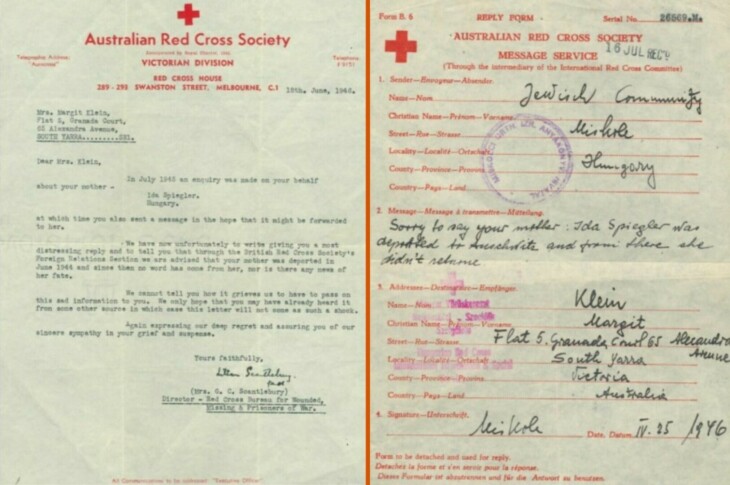 After the war ended, Melbourne-based Margit Klein made enquiries to locate her mother in Hungary. She received a letter (left) from our collection from the Jewish Community of Miskolc, Hungary, stating: “Sorry to say your mother, Ida Spiegler, was deported to Auschwitz and from there she didn’t return.” The second letter (right), received a few months later, signed by the Director of the Red Cross Bureau for Wounded and Missing & Prisoners of War, confirms her mother was deported from Hungary in 1944 – and there had been no word from her nor any news of her fate since.

Although deportations started after the Nazi invasion in March 1944, their increased scale and sustained efforts from May displaced 440,000 Hungarian Jews over an eight week period. Estimates state around half a million Hungarian Jews died during the Holocaust.

To learn more about their experiences, watch Hungarian-born survivor Susanne Nozick’s testimony below.

This Jewish Calendar from our collection was donated by our co-founder Bono Wiener. 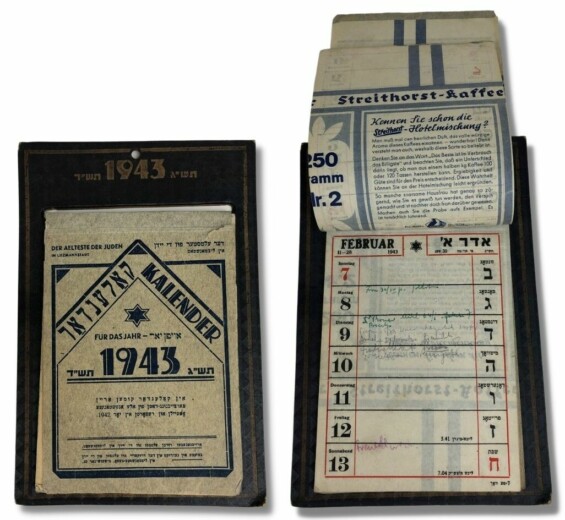 The calendar was produced by the Judenraete, a Jewish council operating in ghettos to assist the implementation of Nazi orders and regulations. Dated 1943, the calendar originates from the Lodz ghetto. Bono lived in the ghetto with his family as a locksmith and leader in the Bundist underground movement until he was transported to Auschwitz in 1944.

Bono survived the Holocaust. After the war, he migrated to Australia, where he lived committed to Jewish life until his death in 1995.

Do you have an item which talks to the lived experiences of Melbourne Holocaust survivors? Start a conversation about donating to our collection by contacting archives@mhm.org.au. For further information please visit this link. 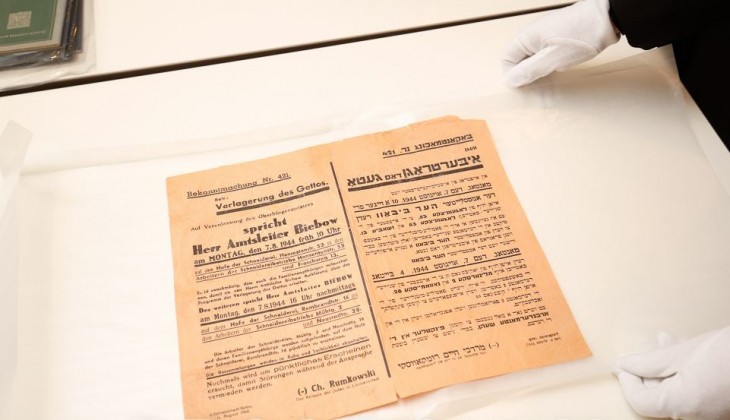