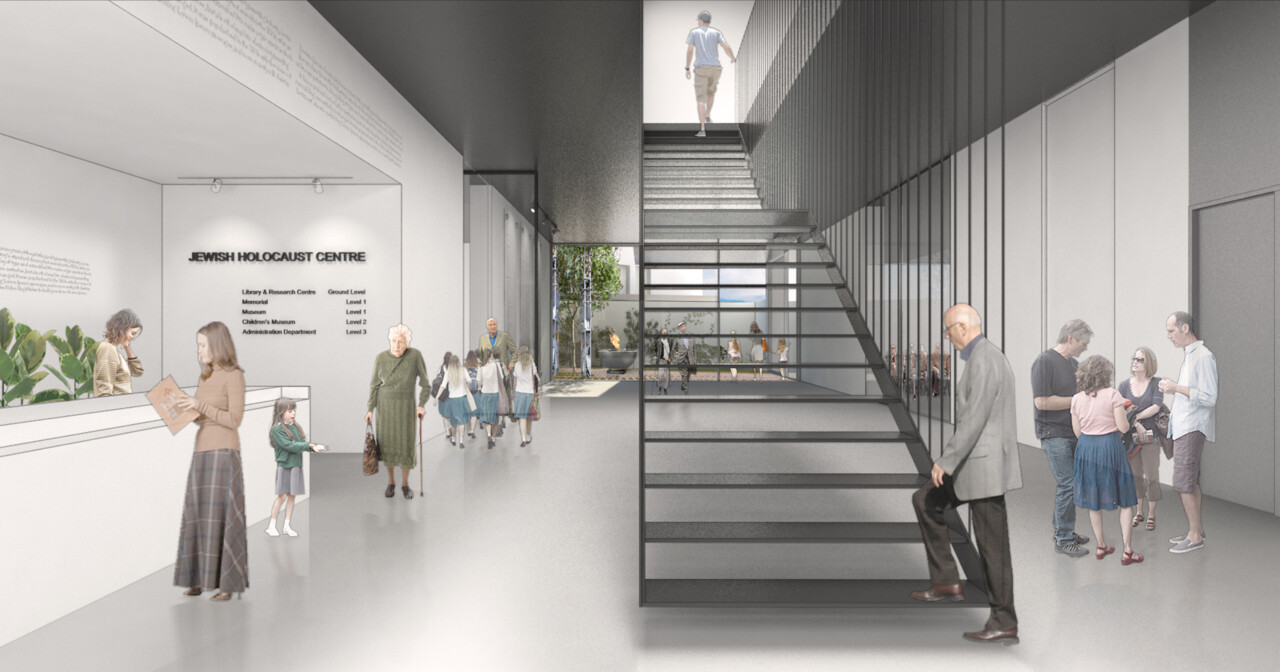 With the construction of the Melbourne Holocaust Museum now complete, we look forward to soon collectively appreciating its accomplished architectural design by Kerstin Thomspon Architects.

MHM Communications and Marketing Specialist Tahney Fosdike recently spoke with Kerstin Thompson, Principal of KTA and Adjunct Professor at RMIT and Monash Universities, to gain a deeper understanding of the knowledge, process and passion KTA invested into our new building.

When did you start working on the new MHM building, and what principals have driven the project from these early days?

Light was always a central driver for the architecture of the MHM. Light is linked to illumination, illumination to knowledge, and given that education is central to the MHM’s purpose, it seemed appropriate to deploy light as a motif in creating welcoming, functional spaces especially for the education, research, and event spaces.

It was an early decision to deliberately distinguish MHM from many museums of the Holocaust that feel very closed. From the beginning we strived to create a building that felt open and welcoming to the community while also engendering calmness and safety – gardens were always envisaged for visitor relief.

How does architecture influence a site of memory like a Holocaust museum?

Architecture’s role in a Holocaust museum is fraught. Can or should architecture be deployed to speak of the Holocaust? Some museums have used architecture in figurative and associative ways to render the horror by reproducing forms and materials extracted from notorious sites of trauma; for example, dark brickwork and wire from Auschwitz. We have not chosen this approach because it risks trivializing rather than enabling an understanding of the history and memory of trauma. Instead, we used a decidedly abstract architecture that recognises that the Holocaust remains outside of representation. It is the content – the artefacts and museum programs – and in the case of MHM its people (particularly the survivors and their families), that can attempt to speak of the unspeakable.

How has culture and history been incorporated into the MHM building design?

The façade reinforces MHM’s role as cultural repository by integrating the original heritage building and treating it as an important artefact of the museum. Embedded in the south-eastern corner, the heritage building forms the cornerstone for the future MHM as a bearer of cultural memory. It links the past and future. The distinctive corner turret remains a defining feature of the streetscape, a shadowline reinforcing its silhouette on the new skin; internally, its significance is reinforced through its transformation into a dramatic lightwell illuminating the memorial space. It is the symbolic heart of the museum, in which the lives lost during the Holocaust are remembered.

To visually and physically connect the façade and interior with the community and street, the facade is variegated through a combination of clay and solid glass bricks. These calibrate the facade according to light sensitivity. Views into and out of the building are enabled to and from less light sensitive zones such as administration and classrooms and withheld from gallery and museum spaces. The visually most open parts are adjacent to the elevated memorial garden and associated central public circulation spine.

Why glass bricks? The November Pogrom of 1938 became known as Kristallnacht, “night of broken glass”, where the fragility of glazed facades became synonymous with the pogrom itself. The incorporation of glazed areas in the façade of the MHM indexes the relative freedom to express cultural identity in Melbourne in 2022 and aligns with MHM’s mission for educational programs which aim to combat anti-Semitism, racism and prejudice in the community and foster understanding between people.

“MHM will act as a beacon of hope. Within Elsternwick, it will be a valued community asset and place of gathering, and on Selwyn Street, especially at night, it will glow from within celebrating life.”

How will people experience the site?

We hope that the new MHM will be perceived and experienced as inclusive, relevant and welcoming to all members of their communities.

The redevelopment changes the relationship with the street, addressing the tension between the centre’s security demands and its need for a welcoming facility. Holocaust museums are notoriously “closed” buildings, their high-risk profile figuring them as bunkers and uniting an associative imperative with a pragmatic one of everyday defence.

The new MHM will overcome what is experienced as ‘threshold fear’ through balancing the desire for security with that of openness and personal comfort. It is open to the street with a generous entry door, the arched window (former door) into the research library area, a view through to the courtyard at the rear. Beyond activating the street, these strategies also reveal and reposition some of the crucial but previously back-of-house activities, such as research, making them legible to passers-by. Glimpses of greenery show and celebrate life within. At night, glowing from within, the MHM will act as a beacon.

In line with the local government’s precinct renewal strategy, to celebrate Melbourne’s Jewish culture, MHM will contribute to the formation of a safe, activated pedestrian zone and reinvigorated street life. The internal functions and façade are central to delivering on this intention.

Can you reflect on a personal favourite space in the realised building?

The central public circulation spine which encompasses the stairs, circulation and breakout areas which links all levels and the MHM’s various activities.

This space is designed to provide some relief for visitors more affected by the difficult museum content. At the western end are views towards either the courtyard, garden terraces or the bay. At the eastern end the beautiful play of light through the glass brick screen and birch trees. These views out combined with the skylights, the use of mirror in them, and other reveals, reflect the world – the sky, clouds, rooftops of nearby house – outside to remind visitors of their location, in time and place, situate them here in contemporary Melbourne. Together, these devices bring outside in to help bring people back from the difficult worlds and histories they have encountered and engaged with in the museum spaces.

How will this building stand out in Melbourne’s cultural landscape?

MHM will act as a beacon of hope. Within Elsternwick, it will be a valued community asset and place of gathering, and on Selwyn Street, especially at night, it will glow from within celebrating life. Strong and delicate, secure and open, the new MHM is built of substantial and enduring materials appropriate to the significance of this museum within Melbourne’s cultural landscape.

Kerstin Thompson is an Australian architect, born in Melbourne in 1965.

Thompson is a committed design educator and regularly lectures and runs studios at various schools across Australia and New Zealand. Thompson was elevated to Life Fellow by the Australian Institute of Architects in 2017 and awarded member of the Order of Australia in the 2022 Queen’s Birthday Honors.

She plays an active role promoting quality design within the profession, and the wider community, through her position as Panel Member on the Office of the Victorian Government Architect’s Design Review Panel and Board Member for Melbourne Housing Expo, a research group led by the University of Melbourne. A passionate defender of civic space and advocate for extracting new life from our built heritage KTA’s redevelopment of the Broadmeadows Town Hall won the 2020 Victorian Architecture Medal.

We also extend our deepest thanks to the following KTA team for their work on our new building:

We look forward to welcoming the public to our new museum space in mid-2023. To learn more about Kerstin Thompson Architects through their website.

Read about our new innovative exhibition focussing on child survivors of the Holocaust, set to launch in mid-2023.