Melbourne Holocaust Museum partners with the Jewish International Film Festival (JIFF) to provide audiences with meaningful connections to representations of the Holocaust in film. Our Head of Education Dr Simon Holloway provides more context to The Auschwitz Report (2020) showing in cinemas as part of JIFF from 24 October to 27 November.
Get tickets

For many Jews, what they perceived to be the world’s silence was a cause of growing frustration and bewilderment. That frustration grew as the war continued, and as the population of Jews throughout Europe declined to the point of near extinction.

Already by the end of 1942, some 85% of all Jews who would be murdered in the Holocaust were already dead, and by 1944 the last remaining Jewish community within the sphere of Axis control was being readied for deportation.

In April of that same year, two Slovak prisoners in Auschwitz-Birkenau conceived a plan, the purpose of which was to make sure that the world knew all that was taking place.

Their names were Rudolf Vrba and Alfréd Wetzler, and The Auschwitz Report tells their story of resistance and survival.

According to Wetzler, they were assisted in their escape by a small group of camp prisoners. Those prisoners (the “underground”, as Wetzler terms them) had compiled a collection of documents, comprising notes on prisoners and guards, a sketch of the gas chambers and crematoria, information related to the daily murder of camp arrivals, and a label from a canister of Zyklon-B.

These prisoners provided Vrba and Wetzler not only with this information, which the two men were to smuggle out of the camp, but also with clothes and toiletries to assist them in their escape. With overalls on top of the suits that they were given, the two men crawled into a prearranged hiding space, where they remained for almost four days.

During this time, the guards of the camp mounted manhunts in search of them, and their fellow prisoners were beaten and punished on suspicion one of them might know where they were hiding.

On the fourth day, at a signal from another prisoner, they emerged exhausted and hungry from their crawl space and – no longer being hunted – were able to escape from the camp.

Our museum collection, managed by Dr Anna Hirsh and her team, holds a postcard (undated) written by Alfred Wetzler to his friend Tibor Winter, in Trnava, Slovakia.

In the postcard he writes:

Only after a long time can I write you a few lines.

It’s been a long time that I haven’t seen you, but still I haven’t forgotten you.

I’m fine and I feel good which is mainly … healthy, which I would like to hear from you too.

These days you have to be humble and in my humility I am … satisfied.

In anticipation of a sign of life from you.

The MHM Testimony Project – consisting of over 1400 survivor testimonies – also includes many survivor accounts of Auschwitz-Birkenau, including that of Abram Goldberg and John Chaskiel.

The story of their survival is a harrowing one. What they endured before effecting their escape, and the tribulations they experienced in making their way to Slovakia on foot both beggar belief. There, when meeting with representatives of the Slovak Jewish Council, they provided the information for which they had risked their lives.

The Vrba-Wetzler Report, which came to form part of a body of documentation known as the Auschwitz Protocols, made its way to numerous countries and across the desks of several world leaders. It elicited a wave of diplomatic support for the Jewish population of Hungary in particular, whose president, Miklos Horthy, called for an end to the deportations.

In addition to inviting condemnation of Hungary’s treatment of their Jewish population, the report led to increased efforts in rescuing Jews, conducted by ambassadors from Sweden and Switzerland in particular. The deportation of Jews also elicited vocal condemnation from the Pope, and was widely broadcast in the United States, where President Roosevelt published the Auschwitz Protocols in an English translation.

Had history worked out otherwise, the resistance of Vrba and Wetzler might have saved the Hungarian Jews. Unfortunately, Horthy’s subsequent attempts at brokering a peace with the Allies led to his government’s being toppled by Germany and replaced with the pro-German Arrow Cross party, who restarted the deportations to Auschwitz-Birkenau.

That Vrba and Wetzler did not succeed in halting the destruction of the Jews of Europe was not a failure on their part, but on those who did not act upon their warning. This film is a reminder of our obligations towards one another, and a warning as to what happens when discrimination is ignored.

The Auschwitz Report will be showing at the Classic Cinema on Monday 14 November at 6:30pm. The screening will be followed by a discussion on the themes of the film between Dr Simon Holloway, Head of Education at the Melbourne Holocaust Museum, and Dr David Slucki, Associate Professor at the Australian Centre for Jewish Civilisation. 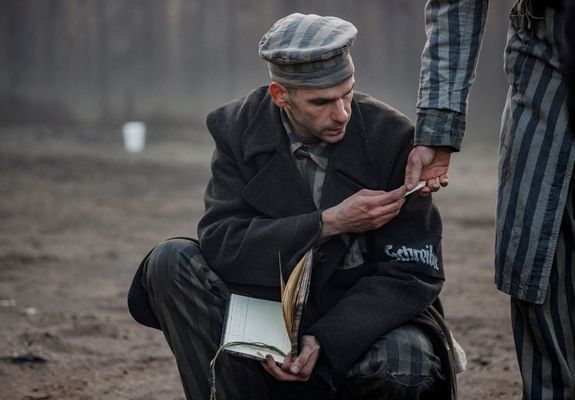