“The British narrative of the Kindertransports focuses on the rescue, humanitarian efforts and survival of thousands of Jewish children, but this narrative marginalised problematic factors such as difficulties Kinder transportees had adapting to a new way of life and establishing a new identity.”

From the MHM collections

Small cloth-bound notebook with hand-painted cover belonging to Lore Oschinski. She sketched and wrote in this book between 17 November 1939 to 27 July 1940, after her arrival from Berlin to England via the Kindertransport. After her arrival, Lore was interned as an enemy alien in the Rushen camp for women in Port Erin on the Isle of Man, England. On the day of her internment, she wrote: “Scout(‘s) Law: smile and whistle under all difficulties”. In early 1939, Herta and Richard Oschinski sent their daughter Lore from Berlin to safety in Brussels, along with other children, where she lived with her uncle Alfred. She attended a local school in Brussels from April to September 1939. With war looming, a large group of Jewish children were sent on the Kindertransport to England. When Lore arrived there, the war had broken out and her parents were still trapped in Germany. She was interned for a while at the Rushen Women’s camp on the Isle of Man. Her mother joined her in England, but her father was unable to leave Germany and committed suicide in August 1942. Lore changed her surname from Oschinski to Oliver and worked as a nurse after the war. 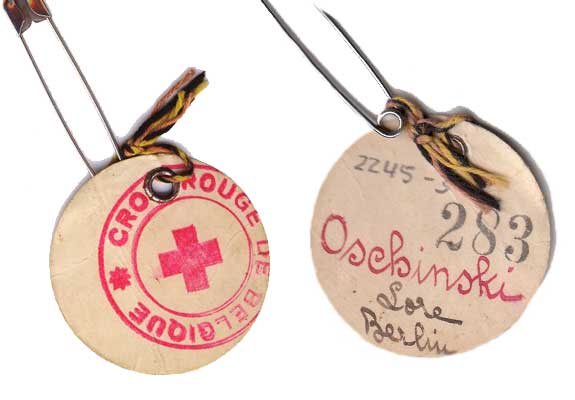 Kindertransport Tag #283 for Lore Oschinski, Berlin, issued by the Belgium Red Cross, and with coloured wool threads corresponding to the Belgian flag. Dated 1939. “Letter to my parents” Kindertransport CSH Melbourne member Frank Baumann. (Frank wrote this letter when he was eight years old).

Sign up to receive the Child Survivor Group newsletter