All Victorian students would benefit from learning about the Holocaust and visiting the Melbourne Holocaust Museum (MHM), according to Victorian Minister for Education Martin Dixon, who made a special visit to the centre in Elsternwick last Friday.

Following a tour of the museum with survivors, led by curator Jayne Josem, Dixon sat in on an impassioned lecture delivered by head of education Zvi Civins, alongside more than 100 students in year 9 from Melbourne Girls College.

The minister, who said he was “moved” and “impacted personally by the experience, stressed the need to teach all Victorian students about the Holocaust, partly due to the universal lessons inherent

“I’d like every school in the state to be teaching the Holocaust. Every student needs to learn about this, whether it be through the museum, or a book. It’s an important part of human history. There are lessons to be learnt from it.”

As part of a continuing campaign to educate policy-makers on the history of the Jewish people and on Israel’s fraught political situation, Caulfield MP David Southwick had invited Dixon to the  Museum, which educates up to 21,000 Victorian students each year.

“I wanted Martin to see many of the students who visit are not from Jewish schools, which allows the centre to provide a window for these students to gain an insight into the atrocities experienced by the Jews at the hands of the Nazis,” said Southwick.

”I’m not sure that he was aware of the full extent of the centre’s work. I think it’s important for him to get an understanding that this centre is far reaching and touches schools right across Victoria.”

Agreeing with MHM educators that the new national curriculum should devote significant time to the study of the Holocaust, Dixon added that perfecting the curriculum is about finding a “balance” between advising and dictating an education model. Stating that the centre is a useful resource, he

said, “We hope that certain schools will be able to say that we can cover the basics of the national curriculum and we want to delve further into various subjects like the Holocaust.

“We hope they will look more deeply where there is interest and expertise in the school and then specialise in it.”

MHM community relations coordinator Michael Cohen said Dixon, who is a former school teacher, has a firm understanding of the importance of education and believes the visit was beneficial.

“The students were very responsive as they mostly are, and I think Martin Dixon was impressed.” 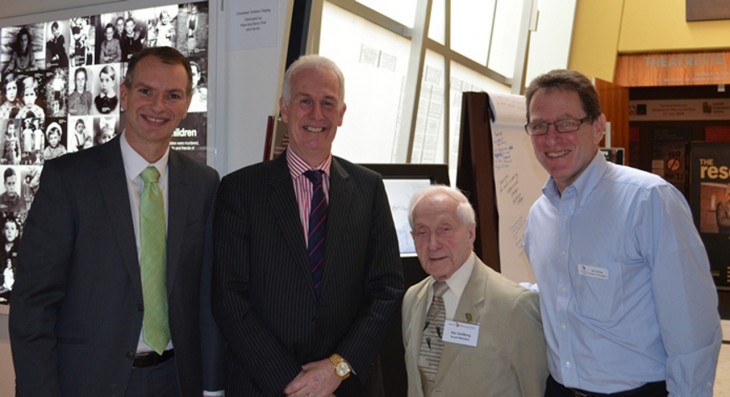