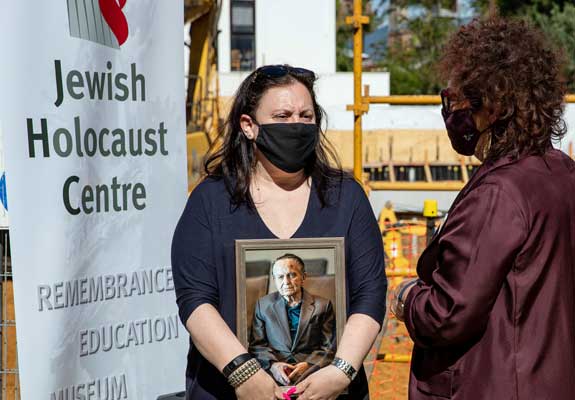 “It gives us great pleasure to announce that the building is being named in honour of Auschwitz survivor Josef Hellen, a major supporter of the project,” says Jayne Josem, Museum Director & CEO. “Josef’s substantial gift represents his firm belief in Holocaust education and its role in creating a better society.”

Josef Hellen was born in Hodonin, Czechoslovakia, in 1926. He had an older brother and two younger sisters. When war broke out, he was in school. In August 1942, following the attempted assassination of Reinhard Heydrich in Prague, a mass round-up of Jews took place. Police walked into Josef’s classroom and ordered him and four other Jewish boys to come with them. He never saw his family again. Josef was first detained and eventually transported to Auschwitz where he lied about his age to survive. He was tattooed with the number 64463 and selected to work in the infamous “Kanada” warehouse. There he joined other prisoners, sorting the goods of Auschwitz deportees that was all part of the Nazi operation to steal the property of those they enslaved and murdered. Josef managed to secure his survival by ingratiating himself with an SS officer by teaching him to throw knives. While he was in Auschwitz, Josef witnessed seemingly endless lines of Jews and others being led to their deaths in the gas chambers. During the death march from Auschwitz, Josef managed to escape and found refuge in a family’s barn until liberation. He always attributed his survival to a mixture of good luck and great instincts.

After the war, he lived in Hungary where he met and married Judith, also a survivor. They immigrated to Australia where he first worked in a factory and saved money to buy his first milk bar. This purchase marked the beginning of his property empire in Australia and the United States.

Josef believed strongly in the importance of Holocaust remembrance and education, including recording his own testimony and life story in his biography the  University of Life: To Be or Not To Be. A very generous benefactor to many and varied causes here and overseas, he was so pleased to have made his commitment and finalised the arrangements for his gift to the MHM redevelopment before he died earlier this year at the age of 93.