The Melbourne Holocaust Museum houses an extensive collection of materials related to the Holocaust, most of which have been donated by Holocaust survivors who migrated to Melbourne. The artefacts collection contains material evidence of the various experiences of Jewish victims and survivors of the Holocaust.

The artefacts collection has been named in honour of Ursula Flicker OAM, a Holocaust survivor from Bialystok, Poland, whose dedicated voluntary work as Honorary Archivist spanned over twenty years. She managed a committed team, and supervised donations and documentation.

Since the MHM opened its doors in 1984, the collection has grown to more than 12,000 historical artefacts. These include original documents, photographs, textiles, and artworks from the Holocaust era. These present evidence of oppression under Nazism that was experienced in ghettos, concentration, labour and death camps, hiding and false identities, resistance, migration, and acts of courage.

The MHM is an accredited museum that complies with the Museums Australia audited standards. Our artefacts are carefully conserved and preserved. They are professionally handled and housed. We are working hard to digitise our collection, to increase and promote access for researchers and families worldwide.

The MHM art collection includes works created by Holocaust survivors after the end of WWII, as witness testimony. Key pieces include Chaim Sztajer’s model of Treblinka death camp (completed and installed in 1985) and artist Walter Preisser’s series of woodcuts that illustrate his experiences in various camps throughout the war (woodblocks were carved c.1946). Sarah Saaroni created a series of terracotta and cast bronze sculptures, including one of Polish-Jewish educator Janusz Korczak surrounded by his orphans. Monumental works by professional artists include Peter Schipperheyn’s black granite Eternal Flame (1999), and Andrew Rogers’ silicon-cast bronze installation titled Pillars of Witness. These six columns depict well-known images from the Holocaust, as well as Jewish motifs. Do you have an artefact from the Holocaust you would like to donate? 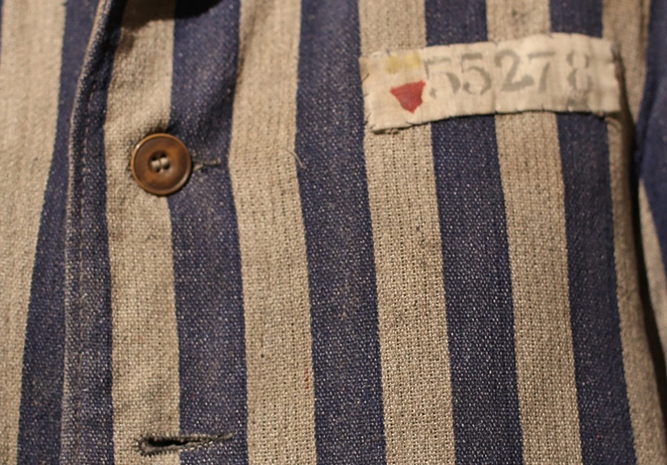 Browse our online catalogue for details of items in our collection. Find out more about significant items in the collection. Every artefact has a unique history. Discover more here. Featured items from the Collection

Take a closer look at artefacts selected from the Collection.