Home » News from the MHM » New Exhibition: ‘Pictures of Resistance’

The Melbourne Holocaust Museum will present a travelling exhibit of the photographs by Faye Schulman, the only known Jewish partisan to document the World War II experienceon film.

The lives of partisans depended on their ability to remain unseen, undocumented and unidentifiable. But one fighter, Faye Schulman, had a camera. Schulman’s rare collection of images captures the camaraderie, horror and loss, bravery and triumph of the rag-tag, tough partisans—some Jewish, some not—who fought the Germans and their collaborators.

“Traveling exhibit produced by the Jewish Partisan Educational Foundation and curated by Jill Vexler Ph.D.”
This exhibit is made possible through the generous support of Thomas and Johanna Baruch, the Epstein/Roth Foundation, the Koret Foundation, the Purjes Foundation, the Charles and Lynn Schusterman Family Foundation, the Taube Foundation for Jewish Life & Culture, the Holocaust Council of UJA MetroWest, and Diane and Howard Wohl. 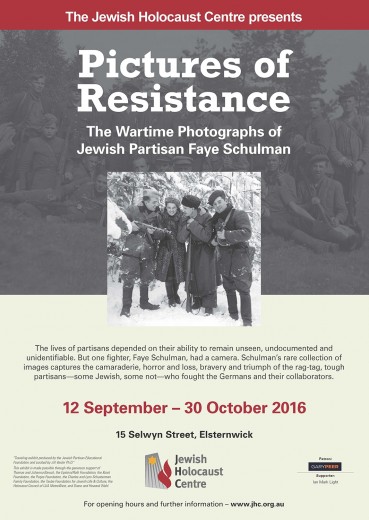