Ties That Bind: “From Auschwitz to Cummeragunja”

Home » Past Exhibitions » Ties That Bind: “From Auschwitz to Cummeragunja”

Ties That Bind: "From Auschwitz to Cummeragunja" 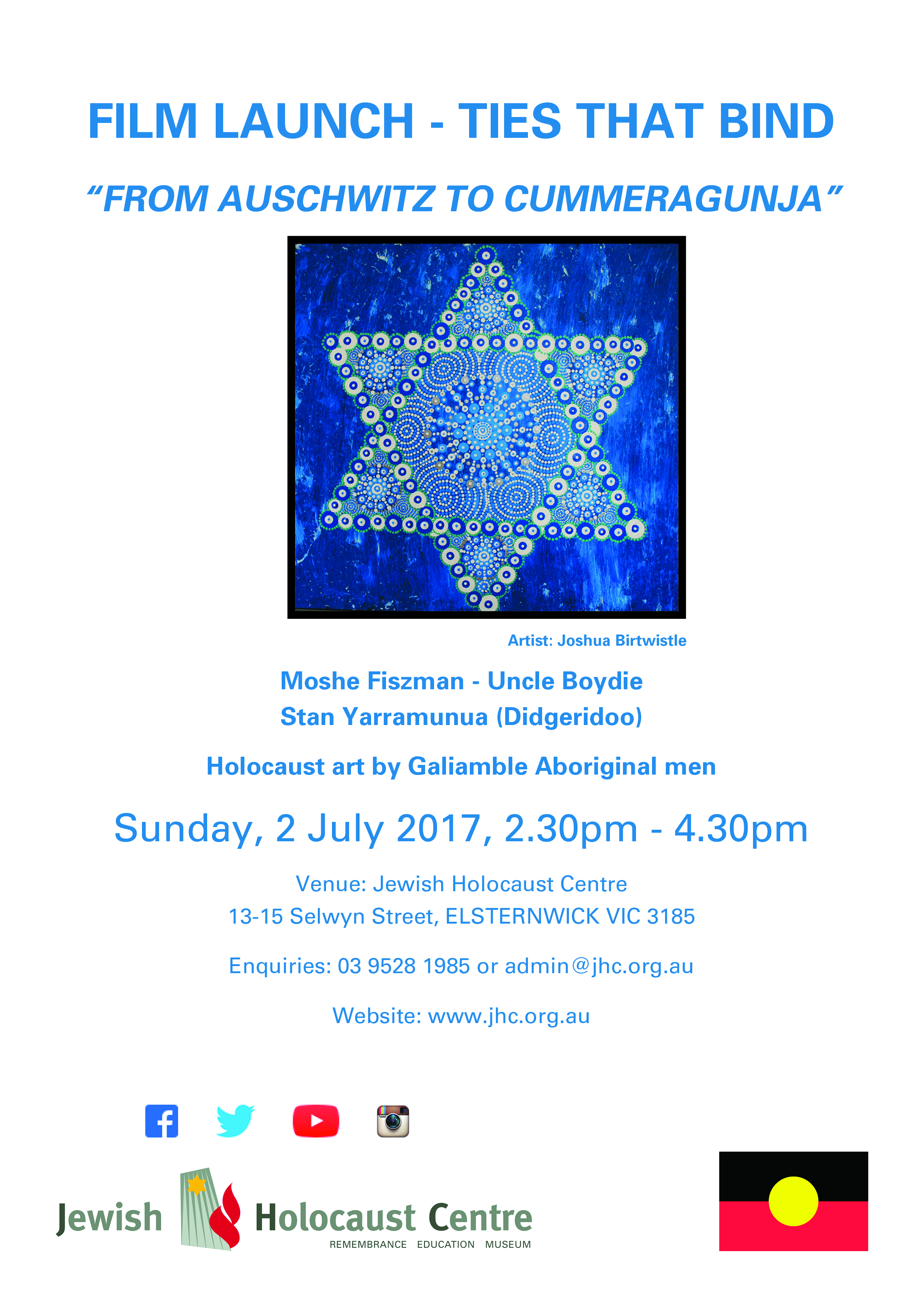 Ties that Bind is a short 9-minute film/ documentary created and directed by Vivian Parry, past Board director of the Melbourne Holocaust Museum (MHM) and chairperson for the Child Survivors of the Holocaust.

Produced by award-winning Screen play writer/Director Justin Olstein the film will be launched at the MHM on Sunday 2 July at 2.30 pm as part of the ‘From Auschwitz to Cummeragunja’ program.

The program will include a didgeridoo interlude by celebrated Aboriginal artist, Stan Yarramunua and the presentation of Holocaust-inspired art by Galiamble Aboriginal men.

Parry serves as a volunteer worker with Aboriginal men in recovery. She brings the men to the Holocaust Centre to learn about one of their own, William Cooper, and his brave protest to the German Consulate on 6 December 1938, demanding the end of the persecution of Germany’s Jewish population.

The purpose of the conversation was to allow the two Elders, among the last eye witnesses to these historic events, to share their life stories, creating a legacy for future generations.

Uncle Boydie describes living at Cummeragunja, an Aboriginal reserve on the New South Wales side of the Murray River, fearful of becoming part of the ‘Stolen Generation’.

Meanwhile, Moshe, half a world away, trapped in the Radom Ghetto, Poland barely survived on starvation rations, eventually arriving at Auschwitz and subsequently transported from there to Vaihingen.

Kristallnacht and the Warsaw Ghetto uprising together with the grief of losing all but three of Moshe’s 200-strong family resonate with Uncle Boydie. He is deeply moved and offers his condolences by saying ‘sorry’ to Moshe.

The film also focuses on the Mission at Cummeragunja in the 1930s, William Cooper’s Aboriginal Advancement League, and the plight of Aboriginal children desperate to avoid the round-ups by Government officials, knowing they would never return.

Austrian composer Mordechai Gebirtig’s sensitive work ‘Kinder Yorn’ creates the finale. Gebirtig was murdered by the Nazis in 1942. The work is hauntingly played by International Soloist, Virtuoso Violinist Boris Savchuk, a Holocaust survivor, who generously re-recorded his version for the film.