Innovative exhibition focusses on child survivors of the Holocaust

With funding from the Gandel Foundation, we are designing a permanent exhibition with award-winning Art Processors to engage young visitors with the lessons of the Holocaust. The exhibition explores experiences of children in hiding during the war who later migrated to Melbourne.

We look forward to launching the youth-focussed exhibition, first of its kind in Australia, in 2023 as part our new world-class museum. It will complement our main permanent Holocaust exhibition by providing age-appropriate learning for younger visitors.

Hide and Seek became central to our offerings for students in levels 5-7 – so much that it inspired us to join forces with  the Gandel Foundation again to create a dedicated space for younger audiences in the our new museum.

“The recent Gandel Holocaust Survey showed that one of the two most important ways in which the public learns about the Holocaust is visiting a museum (the other being specific Holocaust education in schools),” says Vedran Drakulic OAM, CEO of Gandel Foundation. “It was critically important to offer this type of experience for young people, teaching them about the Holocaust through the eyes of their peers – Jewish children who were trying to survive, and who later settled in Melbourne.”

The exhibition explores the lives of seven survivors – Joe de Haan, John Lamovie, Halina Zylberman, Paul Grinwald, Henri Korn, Sonia Kempler and Floris Kalman – drawing from their first-person narratives. It emphasises the survivors’ bravery and perseverance, alongside the acts of kindness by others that helped save their lives.

“At the museum, we know that sharing stories is the best way to connect to our shared humanity,” says Jayne Josem, MHM CEO & Museum Director. “For younger visitors to encounter stories of survivors, who were children like them during the war, but had incredible experiences of being in hiding and being rescued, what better way to learn about history and humanity, intolerance and kindness, justice and hope?”

The exhibition showcases primary source material from our collection keeping a child’s perspective in mind, including testimonies, artefacts, photographs, and documents from the Holocaust. One interesting item includes Joe de Haan’s false identity card issued in 1941, identifying him as delivery boy Willem Walvis.

It was too dangerous for Joe to stay in his hometown, so he was hidden by the Resistance in the north of the Netherlands. Today, Joe volunteers at our museum sharing his experience with students.

The exhibition also comprises cutting-edge exhibition technologies, including soundscapes, moving image, projections, illustrations, and dioramas, to create an immersive learning journey. Building on a concept developed with Thylacine Design, we are now working with Art Processors to bring the exhibition to life.

Art Processors have worked with arts and culture industry leaders, including the Art Gallery of New South Wales, Australian War Memorial, MONA, and significant overseas organisations, including the Getty and Portland Museum of Art.

We will install the exhibition in their new museum building, alongside another permanent exhibition space, special exhibition gallery, VR facility, learning areas, contemplative garden, memorial room, resource centre and library and two auditoriums. With construction almost complete, we are excited to have begun plans for an early 2023 launch. 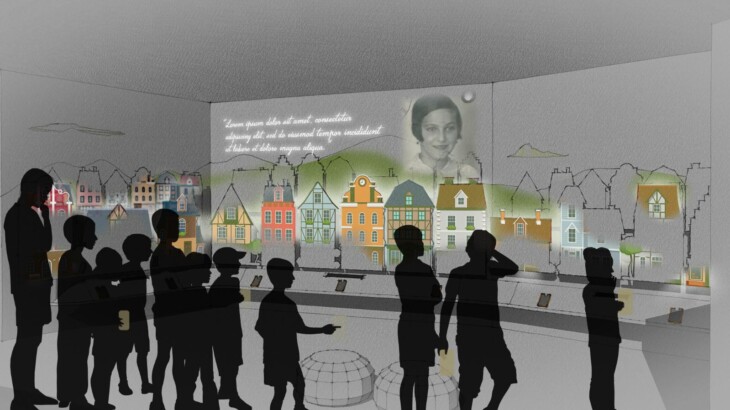