A Will to Live: Autobiography, George Ginzburg

Home » Books » A Will to Live: Autobiography

His family risked everything in 1921 to escape the communist regime in the Soviet Union to forge a safer and better life in Berlin.  As a child, George experienced the Berlin of the 1930s, attending the 1936 Olympic games and witnessed the horrors of the terrifying “Kristallnacht” in 1938.  Evacuated with the Kinder Transport from Germany to Belgium, he later fled the invading German army across the Spanish border but had to turn back.  When he tried desperately to enter Switzerland via France he was betrayed by Swiss guards.  Arrested as a spy, George waited in a Gestapo prison undergoing interrogation and torture before enduring the agonising transportation by rail across Europe.  What followed was the tale of one of the longest surviving Jewish slave labourers in Auschwitz.  As inmate No. 64 147, George Ginzburg survived for nearly three years.

During the infamous Death March evacuation from Auschwitz in January 1945 George managed to escape into the Bavarian forest, struggling for survival until the advancing American forces stumbled upon him.  He enlisted into the Third US Army Intelligence C.I.C. and served as official scout and interpreter throughout occupied West Germany.

Miraculously, at war’s end, George was reunited with mother after seven years of separation and so began his journey to Australia to begin a new and safer life with a young wife and his mother. 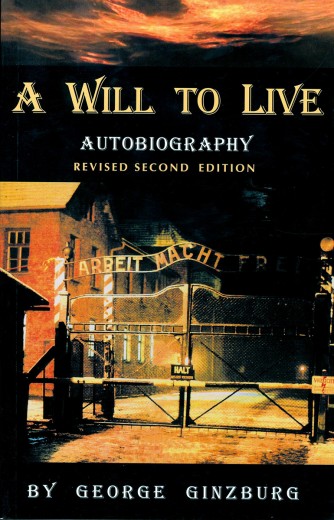