The Boy in the Striped Pyjamas is a powerful text and is certainly popular for a reason. While we do caution teachers regarding its many inaccuracies, we also believe that these can be introduced to students as a way of critiquing the text and deriving greater meaning out of it – and growing their understanding of the Holocaust.

Explaining the novel’s success is not difficult. Bruno, the main character, is likeable, his attitudes are inoffensive, and his friendship with the Jewish prisoner Shmuel is easy to understand. The story introduces students to the horrors of the Holocaust, but it does so gradually and with relatable protagonists.

However, the text leaves some readers emotional, meaning teachers need to approach it with sensitivity and debrief some of the novel’s themes. Our goal is never to shock or distress students but to elicit empathy. That is most effectively done when students are not overly upset by the material.

That said, there are significant problems with the text. We do not discourage teachers from using The Boy in the Striped Pyjamas, but we strongly encourage them to be mindful of these problems.

Let’s cover four specific problems with the text and techniques for overcoming those in classroom reflection activities.

The Boy in the Striped Pyjamas undeniably elicits empathy – but empathy for whom? The horror readers experience as Bruno joins Shmuel in the camp makes the book’s final section compelling and agonising in equal measure. This conclusion reduces many students to tears. Readers undoubtedly appreciate the gross injustice of all of those deaths – Shmuel’s included. But the tears are for the character that we have come to know and love, to whom we relate: Bruno.

Students occasionally declare that “he wasn’t even meant to be there” when asked about the tragedy of Bruno’s death. While this is true, it provides us with an obligation to highlight the injustice of all of those deaths. Was Shmuel meant to be there, for example? Were any other men depicted in the camp meant to be there? This is a powerful opportunity for students to consider why they lament Bruno’s death more than any other, allowing them to critique the text.

How might we be positioned to identify with Bruno and not with Shmuel? Why might that be problematic?

We need to reckon with the unbridgeable gulf between the The Boy in the Striped Pyjamas’ depiction of Auschwitz and the Auschwitz of history from a historical perspective. The book (and the film too) portrays the perimeter of Auschwitz as a fence to which an unwary wanderer might accidentally come into contact, providing a full view of its internal operations. A simple wire fence, beneath which a child can scramble, demands an answer to the question: why didn’t Shmuel climb out?

In John Boyne’s Auschwitz, Shmuel spends his days at an unguarded corner of the camp to get away from fighting and squabbling. That he should be at liberty to do so is simply bizarre, but that his pastime might come to involve playing checkers with a civilian through a gap in the fence is, frankly, perverse.

We can correct these historical errors and invite teachers to engage with information relating to the historical Auschwitz-Birkenau. To do this, we recommend watching the testimonies of Auschwitz survivors at our Eyewitness Project.

Students engaging with this text should be aware that Auschwitz had a thoroughly defensible perimeter, prisoners were always under guard, and the inner fence (there was more than one) was heavily electrified. This novel could have been set at a different camp (certainly at a different type of camp), so we need to ask ourselves: why did John Boyne set it at Auschwitz? What has Auschwitz come to represent for people?

The Implausibility of Bruno

In relation to the The Boy in the Striped Pyjamas’ historicity, Bruno’s implausibility is less obvious than is that of the camp. Certainly, interested teachers can provide an opportunity to engage with the historical commandant of Auschwitz, who, for most of its existence, was Rudolf Hoess. His home directly abutted Auschwitz, a few kilometres from Birkenau, where the novel is set. While Bruno’s father is not necessarily modelled on Hoess, he did have several children, and we can ask ourselves how much those children might have known about their father’s work.

Whatever engagement they had with their father’s work, it is implausible to suggest that they – or any German child for that matter – was not aware of the dangers ostensibly posed by Jews. Bruno’s ignorance is defensible only as a narrative trope, providing the opportunity for Bruno’s sister to inform him and, therefore, us.

However, we hope this encourages classrooms in learning about actual childrens’ attitudes from the period. One way of engaging with the experiences of German children is by looking at propaganda targeted at them. Such materials were ubiquitous within the Nazi state, but particularly engaging examples include the 1936 children’s book Trust No Fox and the 1938 children’s book The Poison Mushroom.

The Impossibility of Shmuel

Finally, and most egregiously, we need to reckon with The Boy in the Striped Pyjamas’ depiction of Shmuel. That John Boyne chose to have a child protagonist is understandable in light of the nature of the fable that he sought to create. Given that he also sought to set his fable in Auschwitz-Birkenau (there were no Jews in Auschwitz proper) means that we need to ask some uncomfortable questions.

What kind of work is Shmuel supposed to be doing? Given that he is merely nine years of age (eight, in the film), what kind of manual labour can he do? He is wearing a uniform, which means they had uniforms to fit children, but why is no reference to other children within the same facility?

Perhaps the essential information for teachers to impart is the fundamental impossibility of this one character. The Nazis and their collaborators sent over 200,000 Jewish children to Auschwitz. With only a small number of exceptions, they murdered them all on arrival.

The camp kept a few alive for medical experimentation but none for labour. There were no child-sized uniforms in Auschwitz and no children who might have worn them.

To explore the actual experiences of Jewish children during this period, we recommend engaging with another of our online survivor testimony programs. Our Ask a Survivor program enables students to hear survivor responses to a range of questions.

Where to from here

For teachers seeking more practical advice on how to engage with their students on any of the issues presented by The Boy in the Striped Pyjamas, we recommend the very helpful collection of resources at FUSE. For a human overview of the Holocaust, we recommend our virtual classroom resources mentioned in this article, Eyewitness Project and Ask a Survivor.

We warmly invite teachers with any questions to contact us or engage with our teacher resources, which includes free Holocaust film and book guides.

Our role is to support you in teaching this difficult subject, and to that end, we would be very happy to address any enquiries or concerns that you may have. 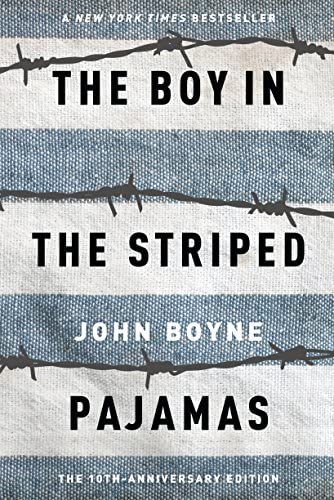