Home » News from the MHM » Ring of Hope

A unique piece of Holocaust history now on display at the Melbourne Holocaust Museum.

Long thought lost, the model that was used at the end of the Second World War by a group of Oskar Schindler’s Jewish workers to make a gold ring for him has been found. It lay in the ring-maker’s workshop in Melbourne for more than 50 years.

Oskar Schindler, the hero of Thomas Kenneally’s book, Schindler’s Ark and the Spielberg film,Schindler’s List was a German industrialist and member of the Nazi party who saved Jews by employing them in his factory and treating them humanely. About 1200 Jews were saved by him.

At the end of the war, one of Schindler’s workers, master jeweller Jozef Gross, made a gold ring for Oskar Schindler. This act is famously depicted in Spielberg’s film, with gold for the ring sourced from prisoners’ teeth. According to Jozef’s son, Louis Gross, ‘[My father] made a model out of lead pipe, used cuttlefish to make the mould, with a channel to pour the molten gold into the cuttlefish.’ The ring itself was lost by Schindler shortly after the war, while the ring model came to Australia with Jozef Gross and lay in his workshop in Melbourne for 50 years. Jozef was a very private person and he chose not to share his story with the world. He only told his family and a few others about his war experiences. Importantly, he gave an in-depth description of the process used to make the ring to his Australian business partner. The ring model was discovered by Jozef’s son, Louis, in a box, along with other jewellery-making paraphernalia after Jozef passed away in 1997.

MHM Curator and Head of Collections, Jayne Josem, believes the ring model is symbolic of the profound gratitude Schindler Jews felt for their saviour, and the hope that he gave them by protecting them from the Holocaust. It gives visitors the opportunity to explore the complexities of Oskar Schindler, a German industrialist who was profiting from Jewish slave labour before he began to protect the Jews working for him. ‘He was a complex character,’ says Josem, ‘a sinner who became known as a saint’. ‘My father was a bit ambivalent about Schindler,’ Gross noted. ‘He had seven brothers and sisters, most married with children, he was married with a child, and no one survived [the Holocaust] other than my father. That was very traumatic, so he had trouble saying [Schindler] was a German who deserved praise.’

Visitors who view the ring model will be able to engage with the idea that in the midst of the horror of the Holocaust, there were some Christians who risked their lives to help Jews. As Josem says, ‘to be able to talk about hope, and acts of courage, it shines a light and leaves people thinking about the good they can do in the world.’

This significant historical artefact has now been donated to Melbourne’s Melbourne Holocaust Museum where it will be on permanent display. 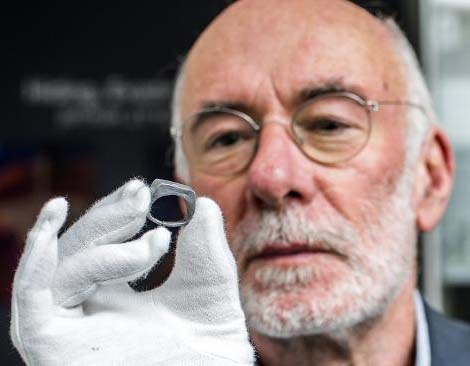