80 years later, what do we know about the Wannsee Conference?

Home » News from the MHM » 80 years later, what do we know about the Wannsee Conference?

This year, we again join in partnership with the Jewish International Film Festival (JIFF) to provide meaningful connections with their programmed Holocaust films. Our Head of Education Dr Simon Holloway provides more context to The Conference (2022), showing in cinemas as part of JIFF from 3 March until 3 April 2022.

The Conference (2022) aims to depict the infamous 1942 meeting that transpired on the shores of Lake Wannsee in Berlin.

Known popularly as the Wannsee Conference, this was a meeting of fifteen senior officials within the SS and Nazi party. Bureaucrats and security operatives, they discussed – in 90 minutes – the evacuation of Jews from their homes across the continent, and their subsequent deportation “to the East.”

The Evidence: How do we know what happened at the Wannsee Conference?

In 1947, the staff of the US Prosecutor discovered the last remaining minutes of the Wannsee Conference. Based on their contents, historians assumed that this meeting must have been where the Final Solution received administrative approval.

Today, however, we know that cannot be case.

Already, at the time these fifteen men were meeting, the number of Jews murdered was in the hundreds of thousands. The death camp in Chelmno was already operational, and the death camp in Belzec was under construction. Others, such as the ones in Treblinka and Auschwitz-Birkenau, were in planning.

These minutes, in their official US government translation, can be viewed online.

There, one will note that the evacuated Jews were to be put to work at building roads. Since most will perish “by natural causes”, the surviving remnant must be considered the most resistant. The experience of history, the minutes go on to relate, is sufficient to demonstrate that those survivors will form the nucleus of a new Jewish civilisation, and will therefore “have to be dealt with appropriately”.

At his war crimes trial in 1961, Adolf Eichmann was asked about the Wannsee Conference, as both its attendee and organiser. Its discussion, in his words, occurred in a spirit of drunkenness. He described the free manner the attendees discussed the precise techniques by which people would be murdered. While this was not where the genocide had been decided upon, it is nonetheless clear that the men present were all intimately familiar with the mass murder of Jews already underway.

The Participants: Who are the men depicted in The Conference?

As we see in the film, five senior bureaucrats were present at the meeting, representing ministries with a special interest in the Jewish Question:

Wilhelm Stuckart served as State Secretary in the German Ministry of the Interior. He held rank within the SS, and as co-author of the 1935 Nuremberg Laws had helped draft the Nazi definition of “Jew”. A lawyer and a former judge, the minutes note his objecting to the inclusion of half- and quarter-Jews in deportations due to the “endless administrative work” involved.

Roland Freisler served as State Secretary in the German Ministry of Justice. Like Stuckart, Freisler held a doctorate in law. A fierce advocate since 1933 of the prohibition of “race defilement”, Freisler was also intimately invested in legal definitions. In August of 1942, slightly more than six months after Wannsee, he was appointed President of the People’s Court, a position in which he interrogated, sentenced and hanged those suspected of treason.

Ministerial Director Wilhelm Kritzinger represented the Reich Chancellory, while State Secretary Erich Neumann (who likewise held rank in the SS) represented Hermann Goering’s office as Plenipotentiary of the Four Year Plan. The latter is recorded in the minutes as voicing an objection to the evacuation of Jews in vital industries, while the former is not mentioned in the minutes as having spoken.

Undersecretary of State Martin Luther  – the discovered minutes had belonged to him –  represented the Foreign Ministry. He is recorded as having noted that there will be no difficulties evacuating Jews from southeast or western Europe, but that there would be a problem with evacuating Jews from Scandinavian countries. Due to the small number involved, he proposed putting their deportation off temporarily.

In addition to the five men listed above, another three senior bureaucrats were present, representing the civilian administration in the occupied East:

State Secretary Josef Bühler represented Hans Frank, as ruler of the General Government. He presided over the largest concentration of Jews within the German sphere of influence, Frank’s representative (like many others in attendance, he held a doctorate in law) is recorded on no fewer than three occasions asking that the Final Solution commence within his territory as quickly as possible.

Representing the SS and security apparatus were six attendees of varying rank:

With a special interest in race-related issues were Otto Hofmann, chief of the Race and Resettlement Office, and Gerhard Klopfer, a lawyer and a former judge, who was Ministerial Director of the Reich Chancellery. While the latter is not cited within the minutes, the former is on the record twice: once, in his offer to send a representation to Hungary to assist the local police in their work, and a second time, in his recommendation for surgically sterilising all half- and quarter-Jews.

Senior members of the SS included Heinrich Müller, who ran the Secret State Police (“Gestapo”) and Adolf Eichmann, who ran an office within Müller’s department tasked with overseeing “Jewish Affairs”. Included also in this list were Eberhard Schöngarth, regional commander of the SS and Police (BdS) in occupied Poland, and Rudolf Lange: Chief of the Security Police (“SiPo”) in Riga, and commander of Einsatzkommando 2. The latter two men held, like so many of their colleagues, doctorates in law.

The meeting was chaired by Reinhard Heydrich. As Himmler’s deputy, he ran the SS and Gestapo from a centralised agency known as the Reich Security Main Office (RSHA). Appointed the Reich Protector of Bohemia and Moravia, he governed the occupied Czech lands, and as President of Interpol, he brought his entire security apparatus to bear on the policing of all occupied Europe.

The Purpose: What was Reinhard Heydrich’s motivation?

From the minutes it is clear that Heydrich desired a relaxation of the definition of “Jew”, which would include half- and quarter-Jews in deportations, and that he also sought approval to deport Jews in privileged mixed marriages. On both of these counts, he was not successful. But there was a third motivation as well, and it is one that is not apparent from the minutes themselves.

Heydrich was assassinated within six months of this meeting. Until then, he was widely considered to be a star on the rise. A highly ambitious individual, he continually sought greater administrative responsibility and control. By bringing together senior members of the party and SS apparatus, he hoped to ensure that the Final Solution would be placed directly under his own jurisdiction.

In this area, also, Heydrich was not to succeed. It would not be his office (nor indeed, anyone’s office) that coordinated the mass murder of Europe’s Jewish population.

Many of the attendees at Wannsee nonetheless played a major role in those operations, and Adolf Eichmann the most pronounced amongst them all.

The Film: What is The Conference‘s central message?

Watching The Conference, one gains a sense as to the different competing motivations of these people, who were nonetheless all working towards a common goal. While we see some of the points on which they disagreed – and disagreed quite strongly – they were in profound agreement on the issues that mattered most to them.

For some of these men, antisemitism may or may not have been a fixed part of their worldview. It was, however, a central party platform of the organisation to which they belonged. Fiercely ambitious, they sought to achieve the goals that had been assigned to them. Whether they may have been personally plagued by the human consequences of their decisions is left to the viewers to decide for themselves. Certainly, in Matti Geschonneck’s The Conference, they do not appear to be.

Stay up to date with the Jewish International Film Festival 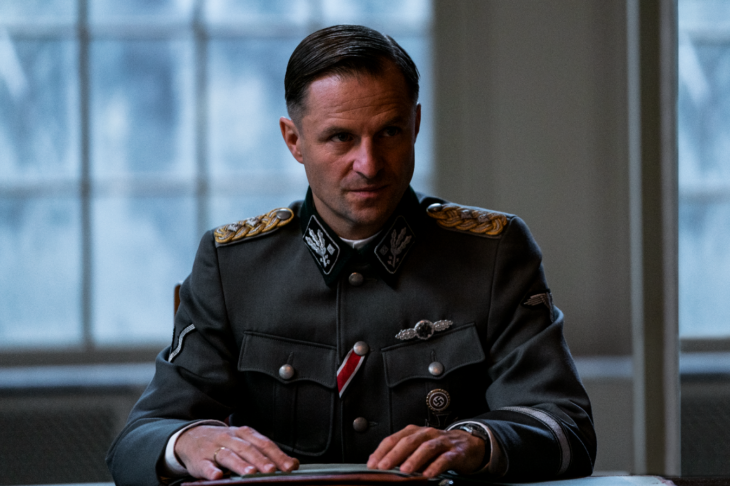