Abraham (Abrasha) Wajnryb was born in Kielce, Poland, in October 1912, the second of three children, in a traditional Jewish home.  He was educated at the local Jewish High School, where, in addition to the usual curriculum, he studied secular Hebrew.

He graduated in medicine at the Warsaw University in 1936, then completed a year internship in the municipal Jewish Hospital (“Czyste”) and stayed on as assistant in the division of internal diseases.

Early in 1939 he met Dr Gelman, the woman he was to marry in May of that year.  Almost immediately he was mobilised into the Polish army and they were separated until January 1940, when they met in Wilno.  In June 1940, Wilno, with the rest of Lithuania, was incorporated into the U.S.S.R.

At the outbreak of the German-Russian war in June 1941, Wilno fell to the Germans on the first day.  The Wajnrybs survived the first two months of indiscriminate street seizures and exterminations.  Forced into the ghetto in September 1941, Dr. Wajnryb headed the division of infectious diseases.  Two years later, after the ghetto was liquidated, he was sent to Kivioli, on the Gulf Schomberg (KZ Natzweiler).

In April 1945 he escaped from the camp, along with a group of friends.  After the Liberation he went back to Poland to join his wife, who survived on Aryan identity papers.  In June 1946 they emigrated from Poland with the idea of going to Israel.  While temporarily delayed in Paris they received migration documents from friends in Australia.  Soon after, their son was born and 14 months later, their daughter.  Dr. Wajnryb and his wife studied for, and received Australian medical degrees.  They moved to Campbelltown where they worked as general practitioners.  Years later they moved back to Sydney, where they practise as doctors. 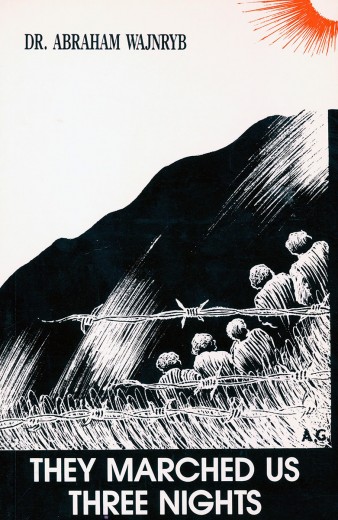