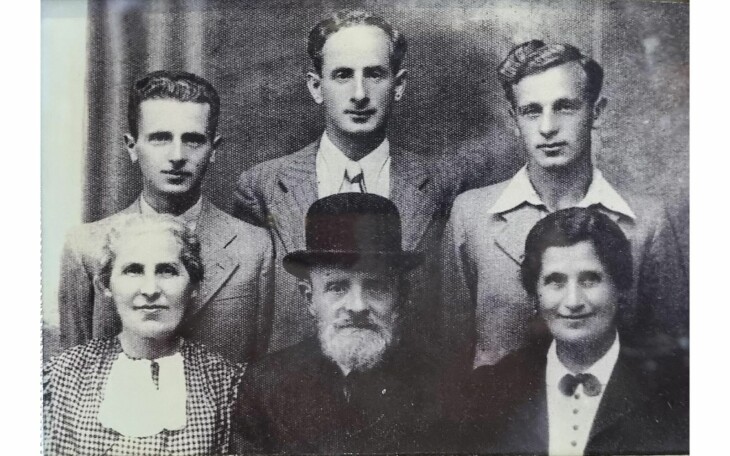 Joseph Marash: An account of our life outside the ghetto from 1 August 1942 until 21 May 1943 and of my miraculous salvation from the “Death Train”.

In October 2021, Loretta Joseph brought a grey exercise book filled with Polish text in pencil, in beautiful handwriting, to the Melbourne Holocaust Museum. Loretta first discovered the existence of this diary after her father Joseph Marash had passed away in 1993 when her aunt Maria mentioned it. Loretta gave the diary to Maria to translate, but Maria was unable to bring herself to read the contents. It was only recently, when Loretta met up with the Chair of MHM Foundation Helen Mahemoff, a school friend from way back, that the diary was translated by Sara Albeck, and then donated to the museum.

Joseph Marash was born to Laura and Natan in Brody, Poland (now Ukraine) in 1907. He was the oldest of three sons of an observant Jewish family. Asher, the youngest, migrated to Mandate Palestine in the early 1930s and became a leader in the kibbutz movement. Henry left for Melbourne with his wife Maria in 1938. The infamous Battle of Brody between the Germans and Soviets in late June of 1941 caused many casualties. Joseph, a lawyer who had been working as a teacher, was in a slave labour unit under the Nazi Occupation. He managed to elude incarceration within the Jewish ghetto set up in August 1942, and instead lived with his labour unit near the centre of the town.

On the 20th of April [1943]…a big bonfire had been made where books, personal documents…and written papers were burnt. The genesis of that event as follows: …in the surrounding forests (not just in Brody), the partisans would gather up, and escapes from both the labour camp and the ghetto were the order of the day. The SS issued an order to burn all the documents belonging to Jews which afforded them the right of free movement around town… By coincidence, an hour earlier, a column of trucks heading west, had stopped in front of the barracks and one of the commanding officers had entered the yard and watched the “game” [ie. the bonfire].  That was enough to convince everyone…that the trucks had been sent to take us away… and that was why our documents had been taken away from us. Usually, the Gestapo, prior to a massive shooting, (according to our “professional intelligence”), in the first days after entering Poland, would burn documents, so as not to leave evidence for removal of people from this world… 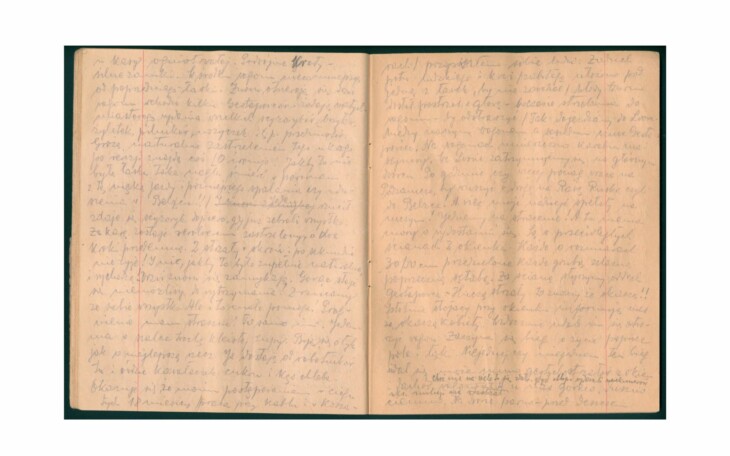 Aktion Reinhardt began in September 1942; Jews were being shot in the ghetto, there were massacres in the forests, and deportations to the nearby Belzec extermination camp commenced. Joseph had managed to elude the deportations until the final liquidation of 21 May 1943.

A very heavy escort (police and Gestapo) ready to shoot with machine and handguns, moved us, about 150 people (men and women) in the direction of the train station…Now, the idea of escape was unthinkable. And yet, when we were passing near a girls’ school, Sigell, who was walking on the edge [of the road] next to me in the last row, jumped to the side, and before the policeman managed to raise his carabin to shoot, managed to run past some old people and into an alley… the police hesitated. But who knows whether he managed to survive!?

They place us in the wagons, 50 per wagon, men and women separately…After about an hour, the trains engine started and at approximately 12.30, it started moving in the direction of Lwow! At once, everyone started removing the barbed wire… The reality was that everybody was afraid of a bullet (the fools!) Eventually, after many attempts, Silberg…jumped first and as far as could be established, without any harm. In the other wagons too, work was being done. That drew the attention of the Gestapo and the SS who were accompanying us in separate wagons, and they started shooting… Generally speaking, the jumps were successful. At the same time, a group of strong youth was working very hard on the doors. Bloodying their hands, they worked with scissors and nail files …to cut out a hole in the door and tear out the barbed wire and the lock.

The train stops. At once the train guards walks through all the wagons. They open ours and in between beatings with gun butts and canes, they transfer us to another wagon…The doors and windows are like the ones in a fireproof safe. Double bars and strong locks…The doors open again, and a few Gestapo come in and demand pocketknives, shaving knives, razors, files, scissors etc. Naturally, they threaten to shoot anybody who is found with anything during an inspection.

After an hour… the train…start(s) on its way to Rawa Ruska, that is, to Belzec! So, all my hopes have come to nothing! We are on our way to oblivion! And here, there is no room of getting out. There are on opposite walls two small windows. Each is 30-50cm, with thick bars, horizontal and vertical. Behind the wall we can hear the voices of the Gestapo. I count the shots…

if I jump, death could be awaiting me too, only sooner and painlessly …So I am pushing towards the window…And now I am fourth! I am being lifted. I slide my legs through the window. Next, I turn 180 degrees on my right arm. And I throw myself forward and sideways. The train is speeding at 60km/h, as they are keen to get to Belzec before dark. Dirt is spraying around me. It is the bullets ploughing it. When I get up, I feel intoxicated…train lights disappear in the distance….

From afar, at the edge of the forest, I can hear dogs barking and a big bonfire is burning. My feverish fantasy sees firemen watching over fields adjacent to Belzec, so nobody can escape.

Joseph, who lost his spectacles in the escape, crawled through the brush and bushes. Almost caught by peasants and German soldiers, he ran into the forest. He encountered both hostility and help. A girl gave him food and directions, and he made his way through various towns including Kulikow where he sees the destroyed ghetto. From there he headed to Brzuchowice, to an address he knew. But nowhere is safe.

Today it is Thursday. By my calculations, of which I am not entirely sure, it is our New Year. Memories of years past press in my head. The faces of my dearest ones, so cruelly murdered, appear to me. I feel stronger than ever what I have lost. Am I destined to live to see the enemy’s fall and take my revenge!?

…. On Saturday, I find myself near a village the name of which I cannot recall. There I am stopped by a night patrol which seems to have popped out of the ground. They are joined immediately by a group of youth, returning from a wedding party. One of these boors hits me across the face so hard that my cheekbone cracks… They decide to hand me over to the police in the neighbouring village…saying that, if I don’t get executed right away, the best-case scenario is that I would be sent to a criminal camp in Jaryczów Stary which is hell on earth…They lock me up… A woman takes pity on me and offers me a bowl of bortsch and pierogi. It is real manna for me, starved as I am and not used to warm food. Despite the pain caused by every movement of my jaw and opening of my mouth, I swallow everything in a moment…

Josef was handed over to the police, and taken to Jaryczów labour camp where he reunited with others recaptured after escape from Brody ghetto, as well as from trains. One morning there was a mass breakout.

The panic is terrible! I lose my friends… who are unable to keep up with me. Each person chooses his own direction. I throw myself across the wheat field… push forward breathlessly. In a distant corner of the field, I lie down on the ground…They are shooting fiercely, the bullets whistle above and around me… Silence falls. Beautiful Sunday! I lie in the high wheat, slowly recovering from that lightening experience. I am free!

During that day and a few after I stepped into huts… I would introduce myself as someone working on the road (my patches confirmed that I was a registered Jew and not some partisan, and my appearance would awaken a general pity. Anyway, the peasants in the Jaryczów-Busk region are the personification of goodness. Hardly anybody refused help despite the fear of denunciation and the police… On Tuesday morning I came…across a policeman… my heart fluttering …He believed me …because I was walking on the highway in plain sight and in daylight.

Joseph was stopped by others along his journey, but finally reached Brody, and the ruins of his family home.

I come into my place… The hurricane of vandalism has been through here! Everything is broken…I wade up to my knees in feathers and down of the torn pillows and blankets. They were looking for people, but also for treasures. Apart from my few books and some rags, everything is gone. I lie on the bed of my dear aunt… Some woman is looking for something to take. She approaches my bed, when she notices a pair of sleepy eyes watching her…Screaming, she runs away. Now she will bring the police! I leave the ruin and climb to the next floor… I find a completely rotten bread, my mother’s creation. Broken in body and spirit, I spend the next three days in one of the rooms upstairs. I live on the crust of that rotten bread. During the day I hear shots nearby. It is the Ukrainian militia after all these weeks (five) still searching…I am petrified that they will come upstairs, although I have blocked all the entrances.

Finally, on Tuesday, the 29th of June (1944), about 11.00 pm, I leave my family home…I walk through dark alleys of the ghetto, Klasztorowna to Kolejowa Street to Mickiewicz Street. Not a living soul in sight. I reach my place of work, where I have a few valuables buried. But I have not the strength to climb the high fence. I bypass the ramp and, through a tunnel… I reach the area around the playing field – without a purpose in mind. Will they, as promised, accept me? They do!! And the doors of my new shelter close behind me. Finally, I am saved!!!

After the war Joseph ended up in a Displaced Persons’ camp in Germany. He fortuitously met Hungarian survivor Angela Korosi and they soon married and lived in a Displaced Persons camp in Bamberg, where Angela was head doctor. Their daughter Loretta was born there. In April 1949 they arrived in Australia.

[Loretta Joseph is the daughter of Angela and Joseph Marash; Dr Anna Hirsh is the MHM’s manager of collections and research]